Willimantic Renaissance, Inc., a 501c(3) Non-Profit Corporation, was formed in 2002 as a grassroots organization to revitalize downtown Willimantic by using the arts to enhance diversity, build community and attract consumers. 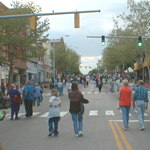 The 3rd Thursday Street Fests started in 2002 as a way to meet our mission statement. This picture is of the first event in May 2002. Although a small crowd came,word spread because thousands came to the next fest and have continued to come year after year. Surveys of attendees have shown that most folks come from the surrounding towns but many also come from New London, Manchester, West Hartford, New Haven, Rhode Island, and Massachusetts too.

The objectives identified in our mission are important to the quality of life in this region. Beneath the appearance of a fun-filled event, festival organizers are working hard to fulfill our objectives.

Our efforts to include and exhibit the diversity in our region have helped to define Main Street as a common locale in which the entire community feels represented and welcome. We have been successful in drawing all age, race and income groups to the festival through the cultural and artistic diversity of attractions. By coordinating representation of various arts and cultures to appear in the same festival, we expose all groups to the benefits of living in a diverse community. The outcome is that the entire community feels that Main Street Willimantic is their downtown, while tolerance and appreciation for others is promoted. 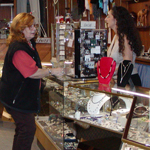 The festival also brings people downtown to shop. We have provided area crafters and artisans with an affordable means for exposure and sales of their products, thereby strengthening the area economy. Participating Main Street businesses have experienced some of their best sales during the festival. In the long term, the festival will help to reestablish Main Street as a regional commercial center.

The people who come to enjoy the festival continually recognize that downtown Willimantic is back on the rise. They also have the opportunity to see that Main Street has more to offer than other shopping centers in the vicinity, such as history, character, and culture. Main Street Willimantic is not the only location that is suffering economically in the greater Windham area. We hope that promoting shopping, arts, culture and community on a regular basis in our region will begin to draw potential consumers and businesses from other regions. The 3rd Thursday Street Fests put the greater Windham area "on the map" and the surrounding towns will benefit from the increased tourism attention.

The Willimantic Renaissance, Inc. board brings a vast array of skills to our project along with our commitment to the city. Our president is an experienced grass roots leader, our treasurer is the former Vice President-Controller of a local bank. We have volunteers with expertise and connections for entertainment, artists and crafters, as well as graphic arts and marketing skills. Members of the group have experience planning and executing similar events for other communities as well.

However, Willimantic Renaissance, Inc. has not produced the 3rd Thursday Street Fests alone; in many arenas we have met with enthusiastic support. The Town of Windham has partnered with WRI and provides assistance through in-kind contributions and invaluable involvement of Public Works, the Police Department, and Recreation Department. The North Central District Health Department works with our group to insure food and sanitary safety, while making fee requirements reasonable. Downtown businesses eagerly participate, voicing concerns, wishes, and suggestions, and providing entertainment and power for vendors.  Willimantic Brewing Company has donated a keg of beer every single month for 12 years.  Zok's Homebrewing solicits donations of kegs from other area micro-breweries which we feature in the Beer and Wine Garden.  We also are greatly assisted by the local university, the community college, The Savings Institute and The Windham Theater Guild with facilities needs. WHUS (University of Connecticut radio), WECS (Easter Connecticut State University radio), WILI (local radio), and The Chronicle, The Broadcaster and The Bulletin (newspapers) and several organizations’ newsletters help promote the event. Many musicians and artists performed for free or for nominal fees in 2002 to get the event off the ground. 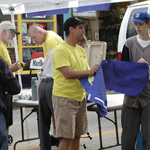 In 2004 a Street Fest Committee of dedicated volunteers was created to help plan, organize and staff the street fest. Volunteers from all walks of life help out on the day of the fest: clients of the Soup Kitchen, Alternative Incarceration and Juvenile Supervision Reporting Center, University students and the community at large provided hundreds of hours.

We define the success of the project through several different areas. It is important that the community is enthusiastic, that entertainers and vendors find it worthy of participation, that merchants find it beneficial to business, and that it is capable of maintaining financial security. Attendance at the festivals as well as public surveys found that not only were people enthusiastic, but that we were meeting our mission in terms of exposure to diversity. We have an extensive list of entertainers expressing interest in performing. A survey of Main Street businesses has shown that the festival brought increased foot traffic and sales. This year we are working to form an alliance of storeowners and matching them with a marketing agency to develop a Main Street marketing campaign.

In 2002, the first year of the festival, there were 3,000 – 6,000 attendees at each festival. In future years attendance has continued to grow and now averages over 8,000 attendees at each fest. Radio, newspaper ads and flyers promoted the festival and downtown Willimantic. The forty Main Street merchants saw increased shoppers. Hundreds of artisans, crafters, artists, and nonprofit organizations along with 700 performers have gained exposure. And over two hundred people have had the opportunity to volunteer services in support of the festival. The entire greater Windham community, if not all of eastern Connecticut benefits from a regional center for culture, arts and commerce, as well as a renewed appreciation and improved reputation for our historic mill towns.